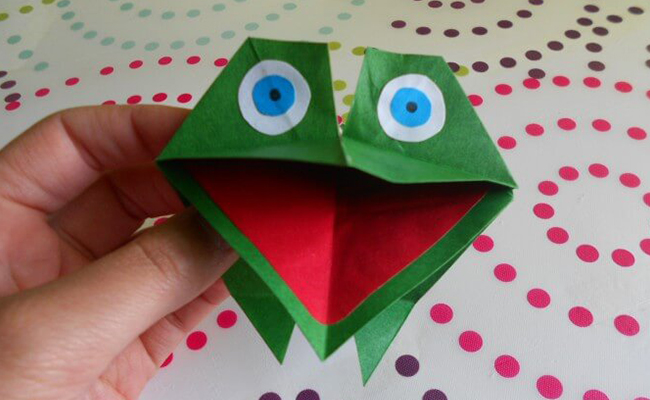 From our article you will learn how to make a frog out of paper. It seems to me that in my childhood every child knew how to turn a simple piece of paper into a boat, airplane, flower or frog. We organized competitions, whose airplane lasted longer in the air, whose frog jumps further.

Now in the realities of the modern world, phones, gadgets and modern entertainment have replaced simple and familiar crafts from paper, origami. But it seems to me that the children are still the same. They just need to show that a paper airplane, a paper frog – is also fun and even useful. Since the origami class brings up the child’s quick wit, observation, develops fine motor skills. Let’s give our children a childhood. It is in our hands to show them that this can be done in general. That a simple piece of paper, in skillful hands, can turn into a work of art.

Sometimes it’s very interesting to watch as an adult, with excitement, for the first time collects a frog from paper, and a sincere, childish smile appears on his face when he finds out that she will now also jump.

One of my favorite paper crafts is the frog. Once in childhood, it seemed to me that to fold a frog, so that it would also jump, it is up to mastery of origami. And for a long time I could not do it. Of course, when I read more about frog matters, it turned out that there was nothing complicated there. Everyone can collect a paper frog, you just need to carefully follow the schemes and everything will work out.

In the article, we will analyze several interesting and simple schemes by which you can make a frog out of paper. We also found a lot of interesting videos and pictures for you, such as paper frogs. As an example, consider the instructions on how to make a paper frog using the origami technique. Also, a frog can be made from modules (we considered this technique in one of our articles LINK) and you can make an interesting application.

The technique of making this frog is somewhat similar to the previous one, all you need is a square piece of paper.

Paper Animals 0
Swans are beautiful birds, they are incredibly graceful, this delicate long neck is snow-white

On the holidays 0
Preparing for the holiday is always a lot of trouble. What to cook, how

Leave a Reply Cancel reply
Origami > Paper Animals > How to make a frog out of paper?
Categories